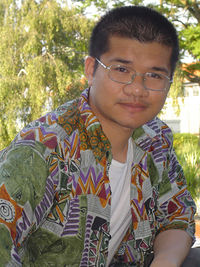 I have worked in Vietnam’s National Key Laboratory of Gene Technology (headed by Prof. Nong Van Hai and Prof. Le Tran Binh), at the Vietnamese Academy of Science and Technology (VAST), soon after I graduated from Hanoi National University of Sciences (HNUS) in 2001. I was involved in research topics ranging from plant response to cellular rehydration stresses, the relationship between DNA polymorphism of Vietnamese minor ethnics and their potential diseases, and molecular biodiversity of some harmful microorganisms, threatened animals or plants.

Since April 2004, I have gained a fellowship and will complete my PhD study in Prof. Michael Hecker’s group in the Institute of Microbiology, EMAU Greifswald, Germany. My scientific interests are now proteomics studies of physiological response and regulation of a marine Planctomyces bacterium named Rhodopirellula baltica, which plays an important role in the global carbon and nitrogen cycles. This bacterium also shows some unique characteristics including peptidoglycan-less cell wall, budding cell division and intracellular membrane compartments that makes them a marine model microorganism.

My recent publication [1] on the Proteomics journal reports an extensive analysis and identification of the proteome expressed by the planctomycete Rhodopirellula baltica. This work was performed at very high standard utilising proteomics-driven analysis of physiology and environmental adaptations of microorganisms. Furthermore, the identification of proteins potentially implicated in the proteinaceous cell wall will contribute to a better understanding of this unusual bacterial structure. The evidence for expressed sulfatases of biotechnological importance is also worth mentioning.